The essentials in brief

* Interest is paid on your paid-in capital after a period of 14 days has expired. The issuer can repay from the specified minimum term, for example in the event of early project completion.

The “Reileck Quartier” is to be built on the former production site of the GRAVO printing company. While the popular Paulusviertel hardly has any freely available building and living space, the former printing shop is to take its place in the center of Halle as a symbiosis of industrial charm and ultra-modern new buildings - and create the character of a new, unique residential area. According to the current state of planning, a total of approx. 150 residential units with approx. 150 underground parking spaces as well as an almost 1,500 m² food retail area including ancillary areas are to be built here.

Video presentation of the project. 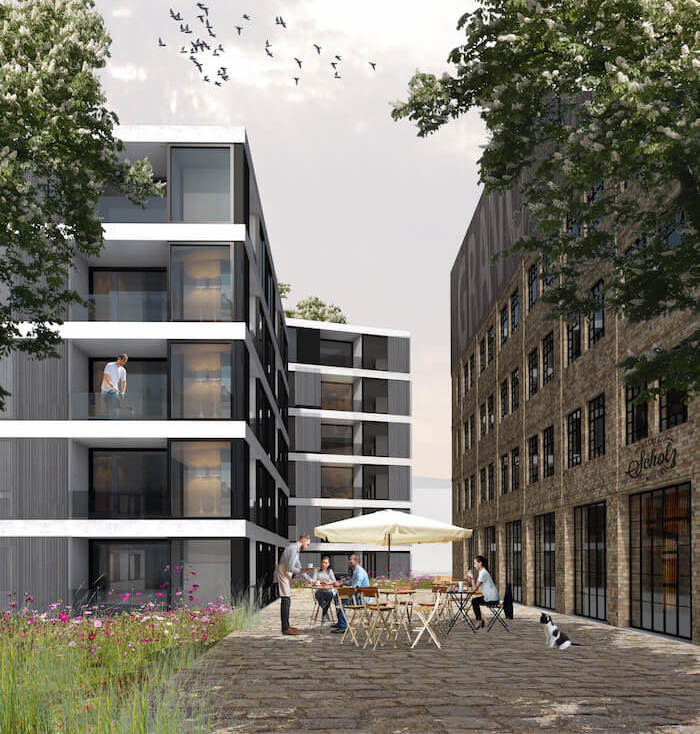 In the early 20th century, the GRAVO print shop was an important part of the city of Halle (Saale). For decades packaging materials, posters, picture postcards and advertising magazines have been produced in the printing shop. While the print shop is no longer in operation today, it still exists as an impressive industrial building in the center of the city and, together with its solid structural basic condition, is waiting for an adequate revitalization.

The plan is to renovate the existing building fabric using extensive construction work and also to erect additional new buildings and an underground car park. The former production building of the GRAVO printing house, together with the accompanying new buildings, will become an independent quarter and real eye-catcher in the popular Paulusviertel.

Upscale furnishings and modern accents will characterize the new buildings, which will allow them to blend in perfectly with the surroundings and at the same time represent an attractive addition to the industrial charm of the existing building. Thanks to its very good location between the three districts of Paulusviertel, Giebichenstein and Nördliche Innenstadt, the food retail space will be an attractive location for retailers. In the heart of Halle (Saale), living space is created that will leave nothing to be desired by its residents and neighbors.

Halle (Saale) belongs to the metropolitan region of Central Germany. Together with neighboring Leipzig, Halle (Saale) is the second-largest economic area in eastern Germany and one of the top 10 investment regions in Germany. The Halle / Leipzig conurbation has around 1.7 million inhabitants and has excellent infrastructure - not least because of the Leipzig / Halle international airport, which is the second-largest cargo airport in Germany with an annual freight volume of over 1.2 million tons. Besides this, Leipzig / Halle Airport offers over two million passengers a year good connections from central Germany to the world.

Apart from the immediate surroundings, the city of Halle (Saale) itself has a lot to offer: The historical and well-preserved city center and the economic boom make Halle (Saale) a particularly liveable city. Halle (Saale) was largely spared from destruction during the Second World War and has a correspondingly large number of old buildings that have now been almost completely restored. 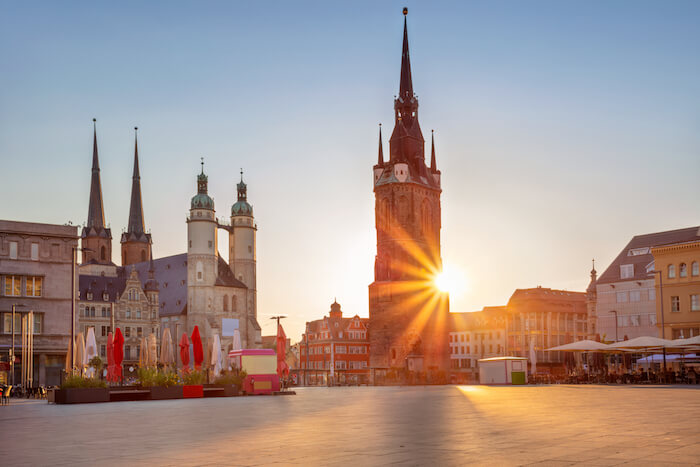 The city of Halle (Saale) attracts nationwide attention due to its strengths in research and science. The facilities of the Max Planck Society, the Leibnitz Association and the Fraunhofer Institute should be mentioned in particular. Also, Martin Luther University and Burg Giebichenstein Art College offer numerous students with a wide range of courses. Halle (Saale) also has the Weinberg Campus, the second-largest East German technology park, which is one of the ten best in Germany. The city on the Saale is an important innovation driver for industry and research and, accordingly, also an important magnet for all those who work in the field of innovation.

The planned quarter is to be built on Reilstraße, on the so-called Reileck - in the Paulusviertel, one of the most beautiful Wilhelminian-style quarters in the republic and one of the most popular districts of Halle (Saale). The inner-city project “Reileck Quartier” on the border with the Giebichenstein district is to be implemented here.

The Paulusviertel around the eponymous Pauluskirche was planned at the turn of the century as an "imperial quarter" on the drawing board and was to assume the role of a representative quarter for professors, civil servants and employees from the start. And even today, the Paulusviertel lives up to this role: the luxurious villas and the well-preserved townhouses make it one of the most attractive residential areas in the city.

It is not surprising that the richly greened Paulusviertel is so popular: the high density of restaurants and shops conveys a metropolitan flair, while the splendid Wilhelminian and Art Nouveau backdrop exudes idyllic calm. This pleasant atmosphere makes the Paulusviertel particularly attractive for families.

Security with this investment

To secure the loan receivables, a land charge of EUR 4,750,000.00 subordinated to the primary financing credit institution, Oberbank AG, and its land charge of EUR 6,000,000.00 on the properties at the Ludwig-Wucherer address are set by a trustee -Straße 44 and Reilstraße 132, 133, 133a / Brandenburger Straße in 06108 Halle (Saale) ordered and registered.

The managing director of the issuer, Mr. Thomas Schulze Wischeler, will personally issue a notarized, enforceable, abstract acknowledgment of debt of EUR 500,000 and NORSK Deutschland AG, as a group holding company, will provide the security trustee with an absolute maximum amount guarantee of EUR 1,500,000 Submit BERGFÜRST Service GmbH.

The loan on which this investment is based is subordinate to the senior loan from Oberbank AG, Germany branch, Munich, within the framework of a syndicated loan.

The funds raised here will be used to supplement the issuer's financing structure to provide the necessary liquidity for any planning and project costs incurred up to the issue of a building permit, initial preparatory measures and for the payment of proportional interest and fees for the issue carried out here.

The interest rates upon your invested funds will start to accumulate after a period of 14 days has passed. Therefore, you do not have to wait for the funding to be completed until interest starts to accumulate on your individual investment.

The project is carried out by Reileck Projekt GmbH. Behind the project, the company is NORSK Deutschland AG as a group holding company, which can refer to a project volume of more than EUR 300 million in the last two and a half years. One of the prestigious reference projects is the Kureck Quartier in Wiesbaden, where, among other things, two ministries for the State of Hesse have been established.

Thomas Schulze Wischeler is both managing director of Reileck Projekt GmbH and a member of the board of NORSK Deutschland AG, which he founded in April 2018 after many years on the board of IFM Immobilien AG.

Allowed characters: a-z, 0. Min 3 characters
The originator withholds tax for all its projects. The tax withholding is 26.37% as stated by German law. The interest received is already taxed.