The Azuria operation is located at 427, Rue des Combattants d'Afrique du Nord in Fréjus (83600), a seaside resort on the French Riviera halfway between Cannes and Saint-Tropez.

The operation is being carried out by Mr. Pouget via his company Loftwood, which has already carried out numerous real estate development operations in the region.

At the moment the acquired parcel contains several buildings, for the needs of the promotion, a part of these buildings will have to be destroyed.

Thus, the sellers who currently live in these homes have agreed to sell their land in the form of a dation*. The operator has therefore agreed to build the extension of an existing villa and the construction of 4 villas with swimming pools as well as two commercial premises. The villas are made of wood frames and are already prefabricated in the factory. The earthworks are underway although the operator has not yet acquired the land. Once this first phase is completed (delivery scheduled for April 2022), the real estate development of the other housing units will be able to begin.

Fréjus is a French commune, in the heart of Provence, halfway between Cannes and Saint-Tropez. Located on a foothill of the Estérel massif, overlooking the valleys of the Argens and the Reyran, it is a small Provençal town whose new districts stretch out to the Mediterranean Sea.

It is also a well-known seaside resort with numerous beaches (15 km) and its port-Fréjus as well as a city of culture which enjoys an exceptional historical heritage with numerous Roman remains.

The development is located near the historic heart of Fréjus, in the Colombier district, only 8 minutes by car from the beaches and the nature center, which offers a wide range of activities. It also benefits from the immediate proximity of all the shops (Grand Esterel shopping area 5 minutes away by car) and access to the A8 motorway in only 5 minutes, allowing access to Marseille or Nice.

The operation is carried out in two distinct phases: the dation and the real estate development.

Focus on the dation

Focus on the program 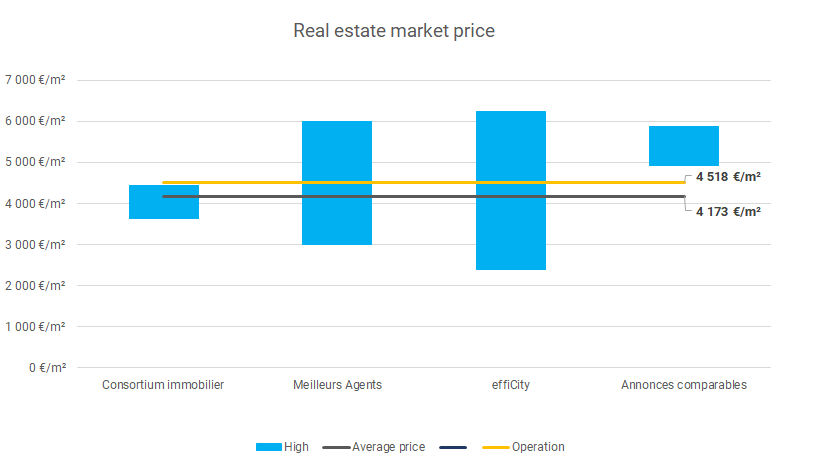 Here, only the price of housing in open access has been taken into account. This is in line with the average price per square meter observed in the sector.

All the social housing units are the subject of an offer from the Arcade Promotion group subject to financing authorizations and approval by the Commitment Committee. The Commitment Committee has issued a favorable opinion on the file and the notaries are in the process of drafting the promise of sale.

The commercialisation of the freehold units is being carried out via a network of independent asset management consultants under the Pinel scheme. It began in September 2021.

Focus on Arcade Promotion, the purchaser of social housing

The Arcade-VYV Group has been a generalist in the housing sector for over 40 years and is the 4th largest player in the social housing market. Through its 32 subsidiaries, it is present throughout metropolitan France and builds 5,500 housing units per year and manages more than 170,000 units.

SCCV Azuria, which is carrying out the Azuria transaction, is 99.9% owned by its parent company, SAS Loftwood, which will carry the bond issue.

The bond will be issued by SAS Loftwood at an annual rate of 10% per year, for a period of 24 months. The interest is paid annually, but guaranteed for a minimum period of 6 months.

In order to provide additional guarantees, the repayment of the bond issue is secured by :

The bond contract provides for an early repayment if :

After an engineering degree, Mr. Pouget first evolved within the textile sector. An industrialist above all, he created and developed clothing factories with up to 1500 employees. Since 2007, he has chosen to devote himself to real estate by creating the Loftwood brand, which is involved in the construction of mainly wooden houses, the group has its own manufacturing plants. The operator has carried out some fifteen operations, i.e. 500 homes over the last six years

Financial elements of the company carrying the obligation, SASU Loftwood can the found in the documents section.