The Ski d'Or operation is carried by the DeSavoie group, headed by Guerlain CHICHERIT, a great Freeride Ski athlete who launched in 2012 in the construction and renovation of high-end chalets. One of his creations, "Le Quézac", even received the award for the most beautiful chalet in the world in 2014. It is dedicated to hotels and mountain residences, both in management and in development, and currently has an estimated land bank of €300 million, or €43 million in net debt value.

The group is therefore specialized in large-scale real estate projects in the mountains and develops eco-responsible complexes.

The project is located in Rue du Val Claret, 73320 Tignes and involves the acquisition of the Ski d'Or (walls and business), a 4* hotel with 27 rooms, a bar/restaurant, a wellness center and an apartment for the manager.

In a second phase, the hotel will be demolished in order to build a luxury tourist residence with 13 luxury apartments. The permit must be filed this winter. Once validated and purged, the apartments will be commercialised in Sale in future state of completion. This is a project with over €65 million in revenues.

The first phase of the project, the acquisition of the current hotel, is financed by a family office for €5.5 million (€7.5 million in total for the entire project) and by Raizers for €3.5 million. Repayment will be made by bank refinancing or by the sale of the hotel. In any case, the repayment must take place before the start of the works.

Raizers will benefit from a first rank mortgage as a guarantee on the Ski d'Or hotel, whose current valuation largely covers the bond loan, as well as a security trust on the shares of SAS Ski d'Or Développement which will hold the asset.

The operation concerns a real estate asset, a hotel with the following characteristics

It is a historical building of Val Claret dating from 1969 on 5 main levels and a basement.

It has the following rankings on the hotel comparators:

There are 3 ranges of rooms:

The hotel will be operated under the current conditions, which are already very good in view of the services offered and the ratings on the reservation sites.

There is no immediate work to be done.

For the second phase of the project :

A building permit will be filed by the end of 2021 and the operator expects to obtain the purged permit by early 2023 ;

Once the permit has been obtained and purged and the pre-commercialisation of 50% of the turnover has been achieved, the operator will then be able to refinance the operation and reimburse the Raizers investors;

The hotel will be demolished by May 2023 in order to build a complex of mountain tourist residences.

The operation is located in Tignes, a particularly attractive Savoyard town famous for its ski area on two main sites (Tignes le Lac and Tignes Val Claret) and coupled with the Val d'Isère area. The resort has nearly 300 km of slopes, spread between 1,550 and 3,450 m of altitude served by 78 lifts and surrounded by 3,200 hectares of off-piste areas.

Tignes has about 2,600 inhabitants and 28,500 tourist beds. The commune borders six French communes, has a border with the Aosta Valley in Italy and is less than 3 hours' drive from major cities such as Geneva, Annecy and Lyon.

The Bourg-Saint-Maurice train station is about 30 km away.

The hotel is ideally located in the heart of the town with direct access to local shops (shopping mall in front) and ski lifts (50 m from the "Tufs" chairlift). Val Claret is known for being the base camp for the big freestyle events in Tignes.

The real estate market in Tignes is quite dynamic. It is a very sought after ski resort due to the size of its ski area and its numerous accesses.

As comparables we take the advertisements and the sales of apartments of types studios under 30 m² being able to correspond to the ranges of rooms proposed in the hotel Ski d'Or in order to give an idea of the possible valorization considering the prices practised in Tignes.

The Bond Agreement provides for the possibility of extending the loan for a further period of 12 months with an increase in the interest rate of 1% every 6 months.

The bond will be issued by SAS Ski d'Or Développement at an annual rate of 10% per year, for a term of 24 months. The bond will be amortized and reimbursed as the operator sells its products, the interest is paid annually but guaranteed for a minimum period of 6 months.

In order to provide additional guarantees, the repayment of the bond loan is secured by :

All the documents associated with this fund raising are available in the "documentation" tab.

Coverage of the operation

*The different valuation methods were performed by cabinet Berthier & Associés in October 2020.
**Trust price based on a two-year guarantee

The main margin of this complete operation will be realized in phase 2, with the construction of the luxury tourist residence presented above. The estimated margin of this second phase will be 20 M€ excl. VAT.

Value of the building as a going concern

Valuation by comparison with continuity of operation: valuation in relation to the selling prices observed in the local real estate market for the same type of property (hotels with SPA and sauna)
- 7 850 000 €

Valuation by income capitalization of the commercial walls: valuation in relation to the income flows (rent at 325 000 € excl. VAT) that this property is capable of producing
The hotel is valued at a moment T on the basis of the income (rent 325 000 € excl. VAT) that it will be able to make available to investors in the future on the basis of a capitalization rate at 4%. These assumptions are estimates by the valuer, Berthier & Associés, based on the hotel's performance to date.
- 8 133 082 €

Value of the land

Valuation by land recovery: allows to verify that if the value of the land is not higher than the value of the built building, taking into account the rules of prospect, of height also of the declivity of the ground, it would be probably possible to realize 9 levels (that is to say approximately 7 100 m ² of floor surface) on the zone of the current hotel. The global value of the completed building could be around 57 000 000 €.
- 13 470 000 €

525 000€ have already been paid by the operator as immobilization indemnities.

Presentation of the operators 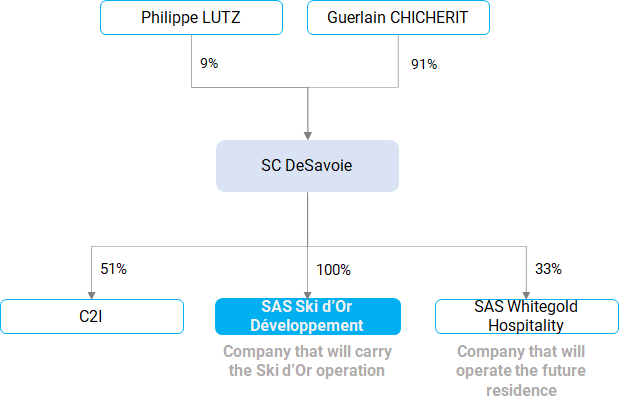 Guerlain CHICHERIT has nearly 10 years of experience in luxury real estate in the mountains. After sporting achievements, including a world championship title in Freeride skiing, Guerlain launched in 2012 the construction, management and operation of chalets and high-end residences. He currently manages, along with two investors (via their holding company) Pierre ZIMMERMANN (a real estate player in Switzerland) and Alex BEARD (an English entrepreneur); a group whose land reserve is estimated at 300 M€. The group specializes in medium to large-scale real estate projects in the mountains and develops eco-responsible complexes.

Pierre LUTZ has nearly 20 years of experience in real estate and hotel management. He is a partner of Mr. CHICHERIT in several real estate investment companies and is responsible for the management of several hotels in the mountains.

Financial elements are added to the documents section.