The operation is carried out by Jérémy Courdon, via his company LES FRUITS SAUVAGES. Mr. Courdon is a real estate professional who has carried out operations as a property dealer, real estate developer and seller of building land. He has several operations in progress, two of which are sold to the Caisse des Dépôts et Consignations. During his career, he has already used real estate crowdfunding (one project reimbursed, one project in the process of being reimbursed and 3 projects in progress).

The project is located Chemin de Ratacan in Estézargues (30390), in the Gard department in the Occitanie region. This wine-growing commune of 587 inhabitants is located to the west of Avignon, close to the A9 motorway, which links Orange and Nîmes.

In 2017, the operator acquired a plot of land on which it obtained a building permit on 25 March 2017. It then divided this land into 5 building units and carried out the servicing work. This work has now been completed and the plots are being commercialised. One of the plots has already been sold, another is under a notarised promise to sell and one is under a reservation contract. There are still two units to be sold on the program.

The operator is selling the building plots with a building permit already served for a project to build a semi-detached house of 82 m² with a garage.

Raizers is being asked to refinance part of the equity used to purchase the land. The loan will be guaranteed by a 1st rank mortgage and the notarised personal guarantee of Mr Courdon.

Estézargues is a wine-growing commune of 587 inhabitants, located in the Gard department in the Occitanie region.

As far as public facilities are concerned, Estézargues has a municipal library and a primary school. The secondary schools attached to the commune are located in Rochefort-du-Gard (8 minutes by car) for the college and in Villeneuve-lès-Avignon for the high school (20 minutes by car). The nearest hospitals are located in Avignon.

The photos above are of plot B, on which the house is already built.

The development work has now been completed. The operator has carried out road and network works for a total amount of 48,000 € including tax.

The 4 remaining plots for sale are serviced.

The work was carried out by the company Sud Terrassement. It specialises in routine earthworks and preparatory work. 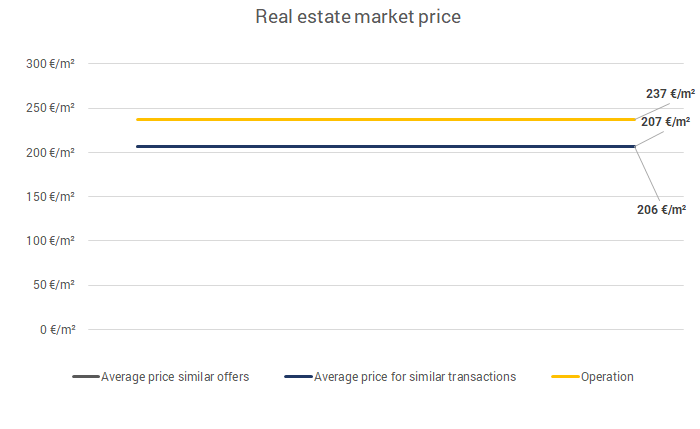 More details can be found in the documents section.

A first unit was sold in February 2020. Commercialisation was slowed down for a few months and then resumed in early September 2021. Since then, two new units have been commercialised. One is under promise of sale and the other under reservation contract.

Including the unit already sold, 3 units out of 5 are pre-commercialised to date, which represents 60% of the operation's turnover.

According to the operator, the project was delayed due to administrative discussions with the town hall of Estézargues, and the project actually started in 2020. 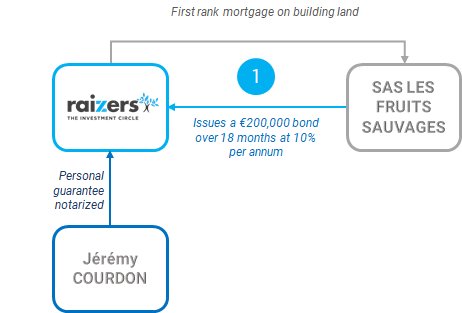 SAS LES FRUITS SAUVAGES, which is carrying the transaction, is 51% owned by Jérémy COURDON, and 49% owned by Laurent Soto.

The bond will be issued by SAS LES FRUITS SAUVAGES at an annual rate of 10% per year, for a period of 18 months. The bond will be amortised and repaid as the operator sells, with interest paid annually, but guaranteed for a minimum period of 6 months.

The bond contract provides for early repayment if :

* This delay is due to unforeseen administrative circumstances and Mr Courdon is in the process of settling this debt.

Jérémy Courdon is a real estate professional who has carried out several operations during his career, in his own name or via different companies.

He began his professional career as a game trader. He continues this activity via the company LE SAUVAGE ELEVAGE, in his own name JEREMY COURDON, in which he employs 3 people.

Alongside this activity, since 2006 he has been involved in property development and the sale of building land in the Gard and Bouches-du-Rhône departments. He has recently started working with the Caisse des Dépôts et Consignation, with whom he has two projects in progress.

Laurent Soto: According to the information provided by Jérémy Courdon, Mr Soto has no operational role in SAS Les Fruits Sauvages.

Financial elements of the company are added to the documents section.