During the last 3 months most of us have spent a considerable amount of time in the lock-down, which has impacted the investments and crowdlending business one way or another. Many platforms have been dealing with pending payments or late and defaulted loans, while our portfolio most of the period remained intact. 2020’ Q2 Investors update will overview projects’ portfolio, updates on EvoEstate and projects’ risk scoring.

In the second quarter of 2020, 6 projects were repaid, out of which 5 had full principal repayment and 1 partial. The latter one still remains the only project on EvoEstate that is late to repay the principal. Duplex apartment development in Tallinn’s tech hub had half of this project as Reinvest24 decided to split one large apartment into two units.

The best performing project was Pramonės str. 8, Panevėžio city municipality which had a 12% expected annual yield, but it has yielded a 28.5% annual return. A situation like this has already happened in the past and the reason for such an impressive increase in the yield is because this project has repaid the principal prior to the minimum term, the borrower had to cover the difference for the remaining term.

At the timing of writing this article, our active project portfolio consists of 154 projects, which are located in 14 countries. During the last quarter, we have added two new countries for investments Belgium and Moldova. In the last update, I have expressed, that I expect the distribution among countries to change and total portfolio exposure from 50% in Spain has decreased to 38.9%, moving forward I expect this trend to continue.

Currently, we have only a single late project to repay the principal, but in June it has repaid half of the principal and we are expecting the next half to be repaid as well. (The investors are accruing interest on this investment during the late period).

Before Covid-19 many, including us, praised short-term rentals investment as a safe haven, a low-risk investment. The hypothesis is proving itself right, that it’s close to impossible to lose principal in this investment, but while the travel was banned, these properties generated a 0% yield to the investors. However, the AirBnBs have already been booked for July and the interest payments should be paid out in August.

There were some late payments from Inveslar, but the reason for it was not due to the borrowers’ insolvency, but mainly due to technical problems on their site. We were able to help them find the solution and most of the projects payments have been settled.

During this quarter we have reached agreements with 2 originators from 2 new countries. Raizers and BeeBonds, from France and Belgium. Although their deals structures vary greatly, I believe both are worthy additions for further portfolios’ diversification.

Founded in 2016, BeeBonds SRL provides financing for real estate projects in Belgium and Luxembourg. Beebonds is regulated since April 23, 2019, by the Belgian Financial Services and Markets Authority (FSMA). The company offers fixed-interest loans. Their investments aren't secured by mortgage guarantees but are secured by personal guarantees.

Founded in 2014 Raizers realizes real estate projects in France, Switzerland, Belgium and Luxembourg.and the company is directly regulated by the French Financial Markets Authority (AMF) as Participatory Investment Advisor (CIP - ORIAS N°14007002) and by the Belgian Financial Markets Authority (FSMA) as an Alternative Financing Platform (PFA). Raizers structure their loans with first-charge mortgages. Up to this date, the company still remains with 0 defaults, but as any other financing platform as experienced some late repayments. The company operates in France, Belgium and Switzerland. Next deal from Raizers will be available for Evo Investors.

Since we have launched, many of our clients appreciated our Skin in the Game approach and we are planning to continue with it. All of our Skin in the Game projects have been paying on time and weren’t late to repay principal yet. However, since 2019 December, we have always been monitoring our due diligence processes and we were trying to make them as structured as possible. By writing this, I believe that the risk scoring has to be structured, transparent and most importantly unbiased.

These are the three values we have built the risk scoring model on, where all the data entries are based on factual data, with no place for interpretations or opinions. Therefore I am proud to announce that now, with every new project you will find a risk scoring table for your convenience. Remember, that EvoEstate Risk rating is of an informative nature only and cannot be considered investment advice.

The rating is an outcome of factual information analysing the key aspects of risk of each characteristic: 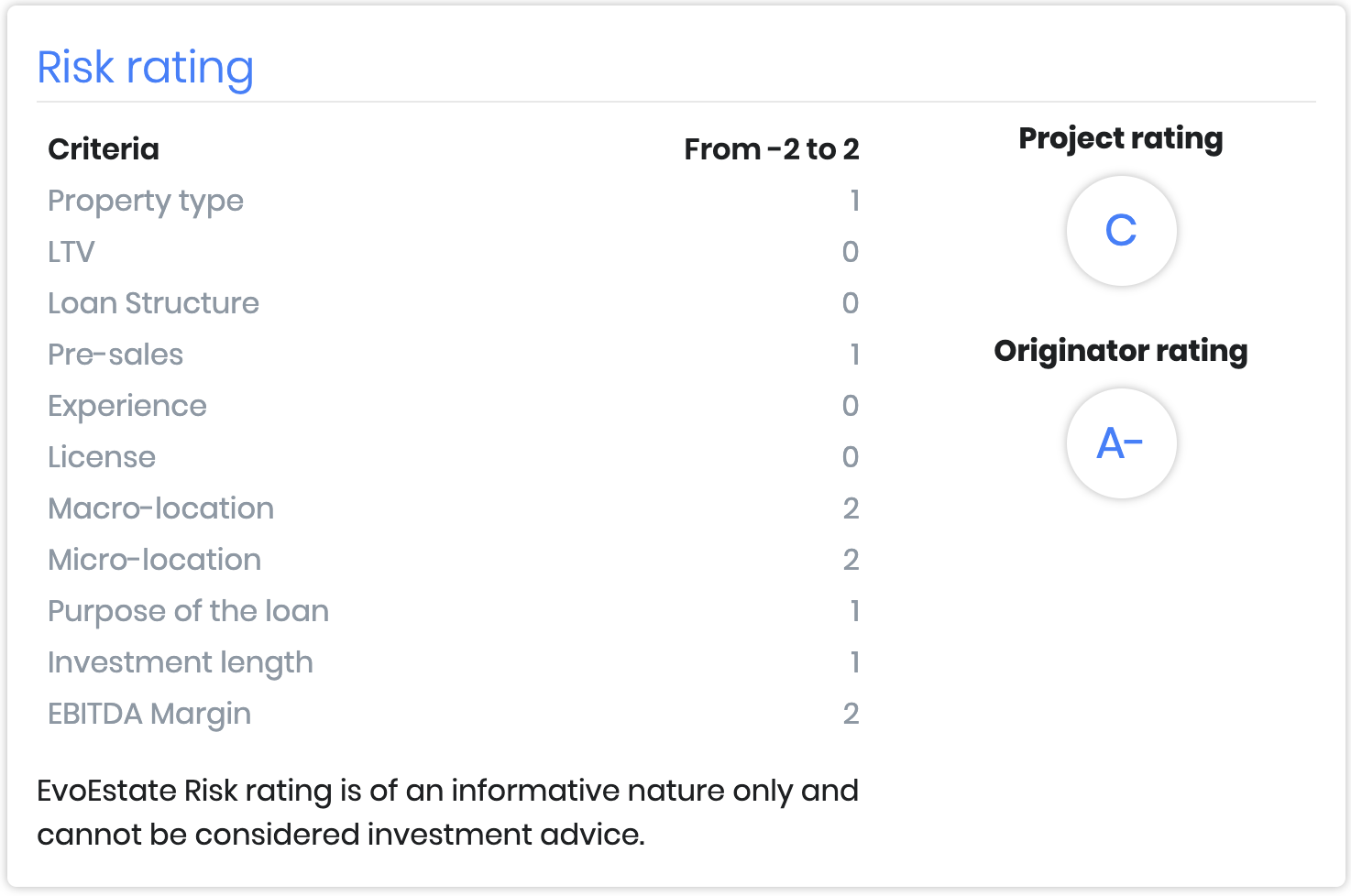 Values of the numbers

Most of the risk scoring entries measure risk based on rating 0, 1 and 2. While for some values such as pre-sales reduce the risk, by -1 and -2. Since we have launched, we have received some queries about the further explanation about how the numbers work. We have collected the feedback and in the coming months, we will be improving the overview and display to make it even more comprehensive for the investors.

This particular example that I have just explained is for fixed-interest loans and for equity and buy to let investments we have built separate models which analyse other data entries which are more relevant for particular deal type. We will have a separate article explaining our approach to risk for every investment type in the future, where you will be able to learn how we define risk in more careful detail.

One of the feature we have recently developed is called “Project updates” where we will update the investors about the status of the project. Because our Secondary Market is getting increasingly more active, access to information should not be restricted, thus all of the updates will be available for all the investors. 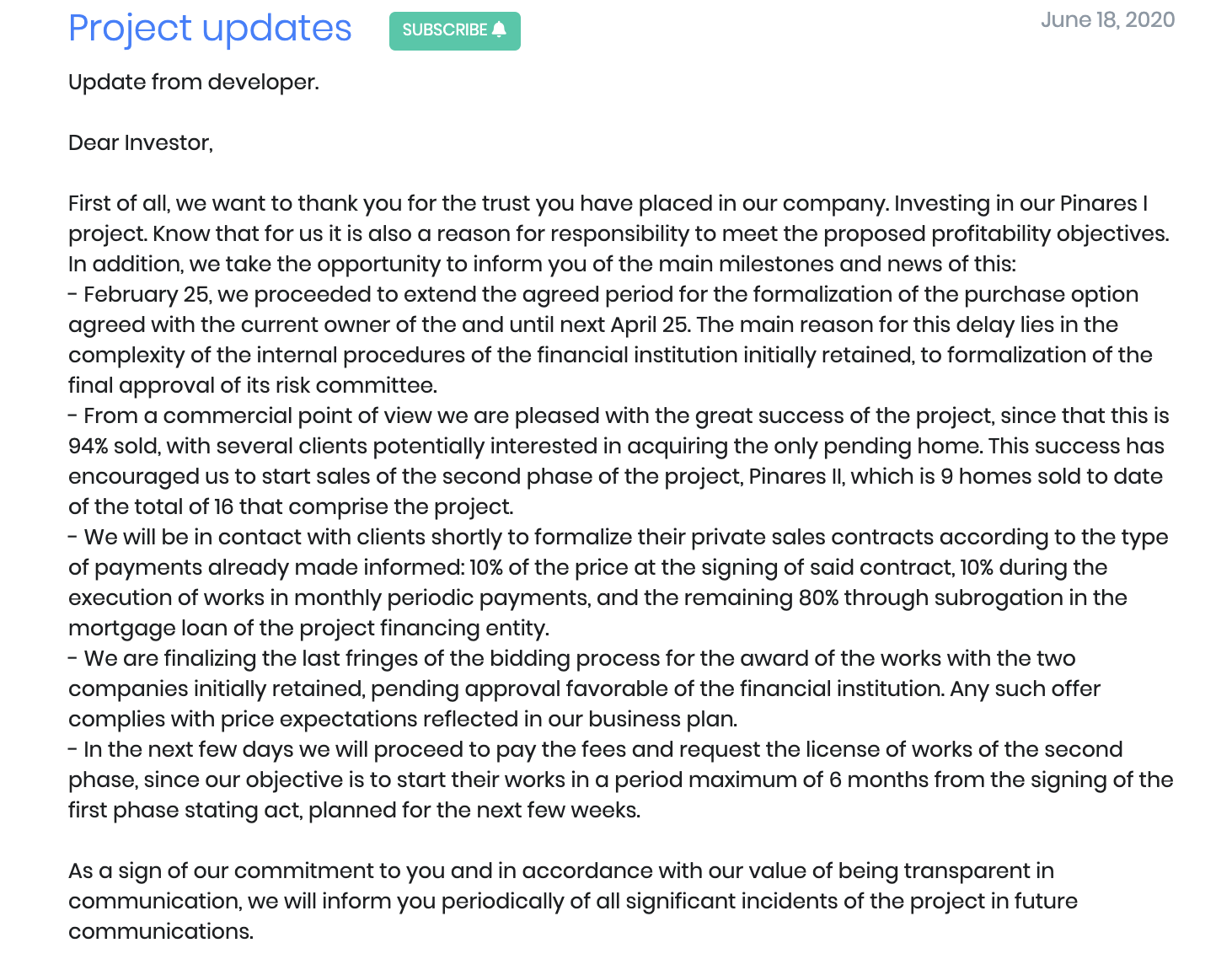 Additionally, we have also developed a questions feature, where investors can ask any question related to the project and we will answer it in a timely convenience. 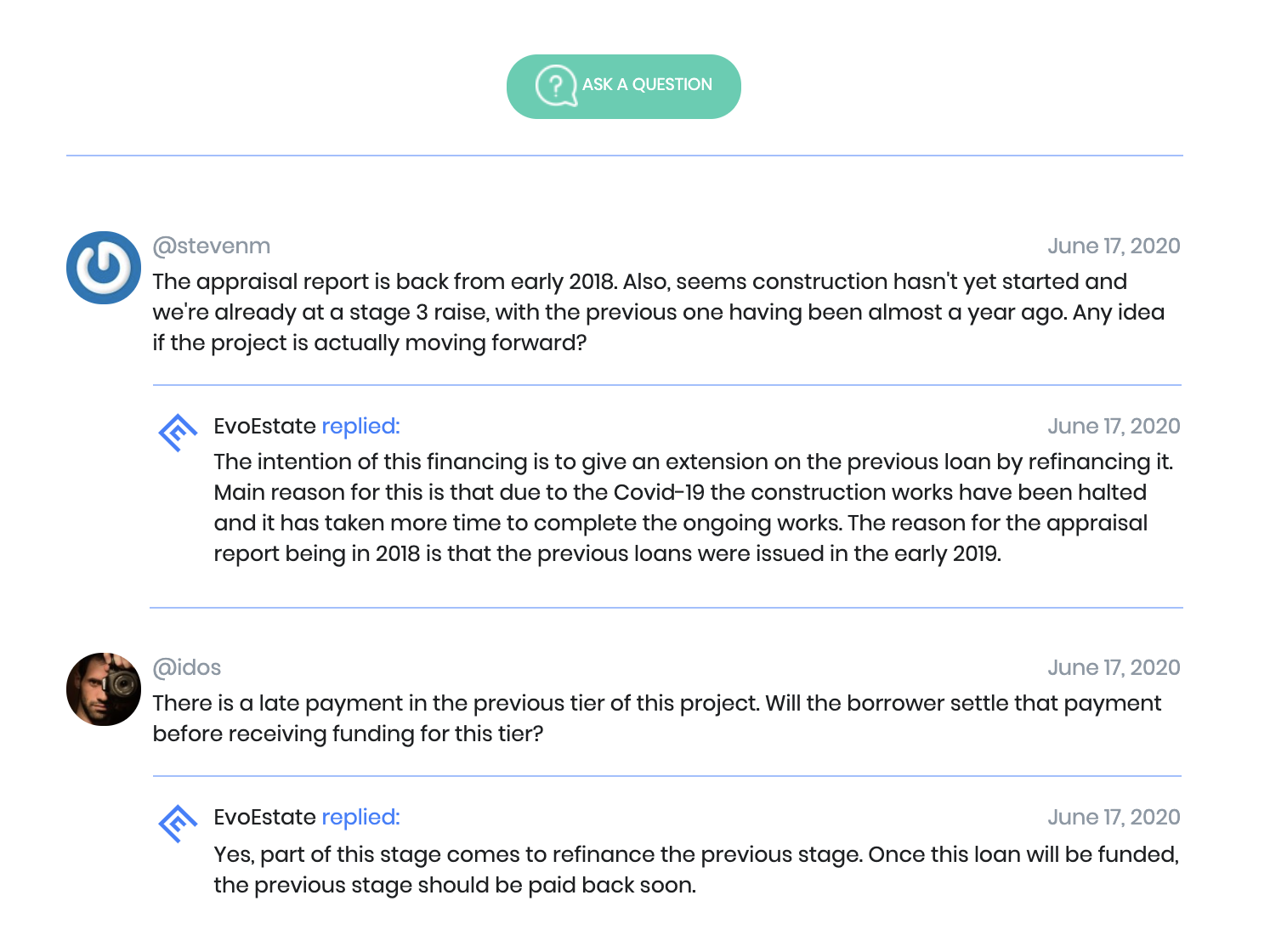 We are continuing to make EvoEstate as transparent as possible and this feature is the first step of making EvoEstate social as well. We are planning to index all the project updates and set up a separate page for a forum where investors can exchange information about projects.

Final notes
During some of the weeks during the lock-down, we have announced that temporarily there will not be Skin in the Game from our side, due to the lack of quality deals. In June the situation has changed and we have had 2 skin in the game projects which were funded in couple of hours. Therefore, it always makes sense to set up your auto-invest, to make sure you don’t miss out on investment opportunities and remember, that you can always cancel your auto investment free of charge within 24-hours in your portfolio page.

What we have been missing lately is high quality buy to let investment opportunities, which would be able to generate stable cash-flow. We are intending to solve this issue in the following months by adding new originators.

Lastly, after months of impressive growth, EvoEstate has secured another equity investment round for our company’s future expansion. We will share more details on this in a close future.