Ireland is currently in the grip of a severe housing crisis as a result of market failure in the delivery of all sectors ranging from private to public housing. On the supply side, the financial crisis of 2009 resulted in record low levels of all housing types being constructed until 2014. Essentially Irish property developers had suffered in the financial crisis and were not able to resume development. 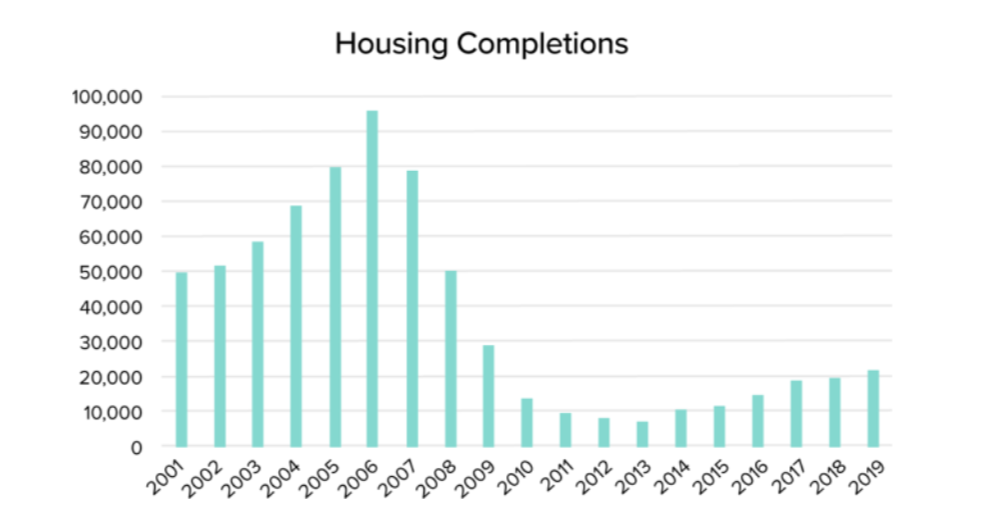 Furthermore, following the crash, there has been an absence of banks and lending institutions that have the capacity or the appetite to lend to the construction sector. As a result, a number of alternative funding providers have entered the Irish construction market. These alternative funders are usually backed by large US or European private equity funds or institutional investors.

On the demand side, underlying demand for housing is high but the Central Bank is keen to avoid the credit bubble of the past has imposed strict borrowing guidelines for mortgage lenders that mean that access to credit is difficult even for those who can afford it.

Multi-national corporate landlords have taken up some of the slack by buying and building large numbers of apartments and renting them. Rent has risen substantially in all locations. For those on or below the average wage, the most realistic chance of having a long-term home is through social housing and the pressure to create more social housing is intense.

It is the number one political consideration in Ireland and recently the election was focused on the availability of housing. Voters responded to this as their key choice in who to vote for. Political action will follow voter concern.

350,000 New Homes
Over the next decade to satisfy the demand for all Irish citizens.

71,858
Households on the social housing waiting list as of 11 June 2018 (latest official figures)

5.35%
Increase in house prices in 2018 & 2019. Prices are now stabilizing thanks to strict macroprudential mortgage limits of 3.5 times salary.

Such is the significant economic and political pressure to resolve the housing crisis, the government, under the auspices of the Department of Housing, Planning and Local Government, launched the Rebuilding Ireland Action Plan for Housing and Homelessness in 2016 committing to delivering some 10,000 units on an annual basis.  As a mark of intent, the government has committed €5.35 billion of funds to deliver on its stated aim. 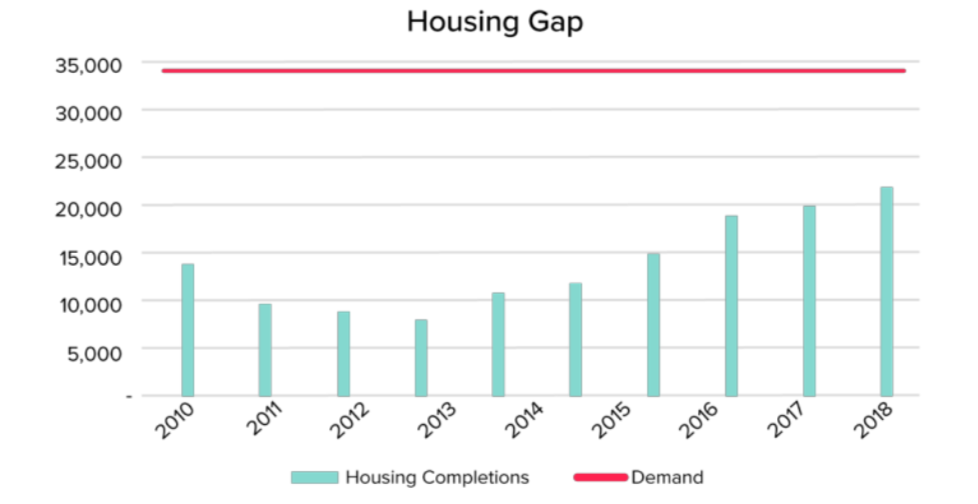 Therefore, the opportunity as presented in this memorandum is real and likely to grow into the medium and long term. At a recent housing conference, leading social housing provider Cluid Housing stated that there are over 70,000 people on the waiting list for social housing.

The Government has outlined its policy to deliver, including acquiring and leasing of, social housing in the Plan. The Plan was released in 2016 by the DHPLG in response to the housing crisis and sets out a clear roadmap to achieve the government’s goals to significantly increase and expedite the delivery of social housing units. The Plan comprises five pillars of concerted actions right across government in which accelerating social housing was designated a key pillar.

Under the Plan, the targeted social housing supply is 47,000 units over the period 2016 to 2021 (at which stage some 10,000 units will be delivered on an annual basis). This will be achieved with Exchequer support of €5.35 billion.

Ireland’s Economic Performance
The Irish economy recovered from the financial crisis of 2008 more quickly and robustly than expected as evidenced in Ireland’s gross domestic product growing 5.6% in 2019 (higher again when multinational profit is included), making it the European Union’s fastest-growing economy for the sixth consecutive year. The European Commission expects growth to moderate to 3.5% in 2020 due to an expected slowdown in government expenditure.

Ireland now experiences record low employment rates of 4.8%. This equates to 117,800 people being out of work. In February 2012, there were three times that number – 356,600 people – out of work, meaning nearly a quarter of million jobs have been created since the low point of the crash. 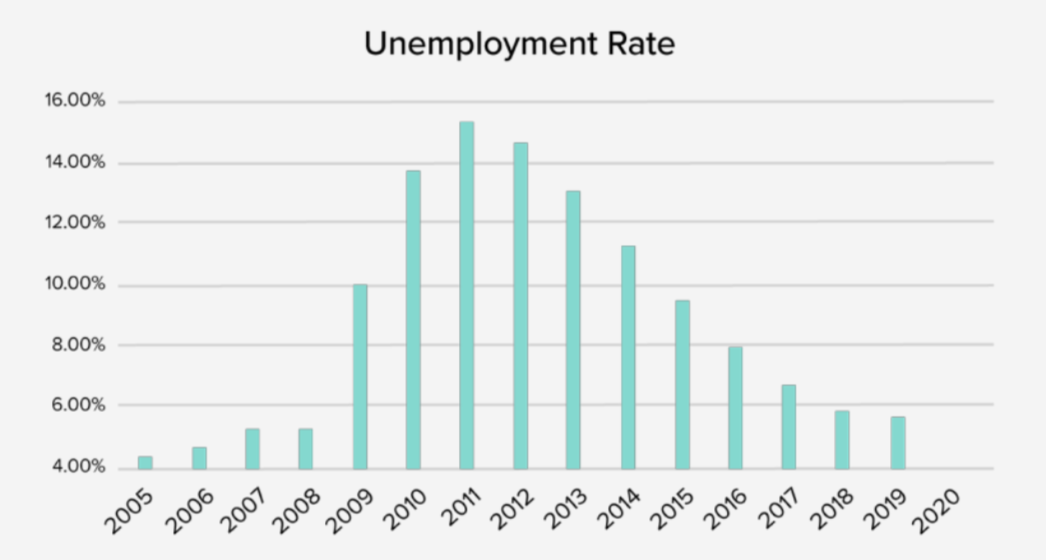 The healthy economy has added to the already strong inward migration Ireland has experienced over the last few decades. Ireland now has the fastest growing population in Europe, as is predicted to reach 6.7 million by 2051. Furthermore, Ireland has one of the youngest populations in the European Union at 36.8 years of age. This compares to 40.5 years in the UK and 47.1 years in Germany. 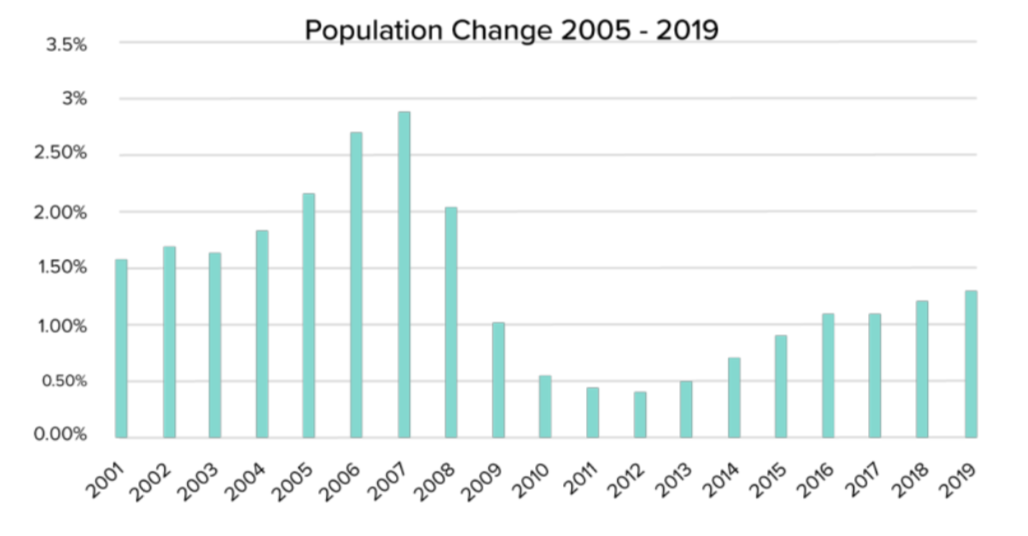 Founded in 2018 PropertyBridges mediates fixed-interest loans for real estate projects in Ireland. The company has financed over €5 Million worth of real estate projects with an average LTV of 55% and an average interest rate of 8.3%, while all of their loans are secured with 1st charge mortgage security. You can find all PropertyBridges listed loans following this link, while active Secondary Market offers could be found here.

If you don’t have an account with us, sign up today and invest in prime real estate loans from Ireland and beyond!

Projects that returned more than expected